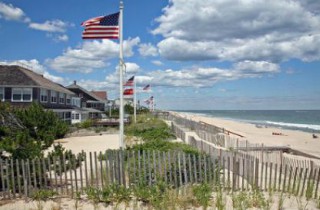 Mantoloking started as a strip of beach bought by Frederick Downer of the American Fire Insurance Company of New York and his lawyer partner Frank Hall around 1875. Two companies, the Seashore Land and Seashore Improvement companies, subsequently formed to develop the resort town.

Incorporated in 1911, the town is best known for the Mantoloking Yacht Club. The yacht club, built in 1900 on land donated by the Downers, has produced 10 Olympic sailors and in more recent years several other internationally-competitive sailors.

Home to only about 300 people, Mantoloking's north end was developed after World War II – after the railroad through town had been abandoned and removed. The most recent census bureau estimates pin the median price tag of a Mantoloking home at upwards of $2 million, tying Alpine in Bergen County as the highest in New Jersey.