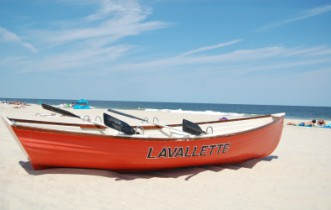 La Vallette was one of the first rear admirals appointed to the U.S. Navy after President Abraham Lincoln created the rank in July 1862. The naval officer was also the father of Albert T. Lavallette, head of the land development company that planned the proposed community “Lavallette City, By the Sea" in 1878.

The town holds two miniature golf courses, a non-commercial boardwalk along its oceanfront, and about 1,800 residents – among them actor Joe Pesci. Pesci’s cream-colored bay house on Pershing Boulevard stands out as strikingly modern among a cluster of more classically-styled beach homes.