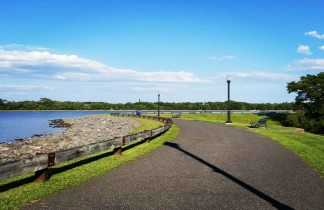 Incorporated in 1850, Brick Township gets its name from Joseph Brick, the owner of the Bergen Iron Works. Originally known as Washington Furnace, the works on the  Metedeconk River took advantage of a easily obtainable resource in bog iron.

Long after the area's bog iron boom, locals chose to hold on to that history by defeating a referendum to change the township name to Laurelton by a nearly 2 to 1 ration. The campaign's backers claimed Laurelton, a neighborhood in the township, had a better sound and standing in the state, reads a 1963 report in the Asbury Park Evening Press.

“Opponents argued that the present name has an old tradition, that businessmen and official bodies would face expensive stationery changes if the referendum passed, and that the local high school made the present name known throughout the state,” the report continued.

Brick, which now boasts about 75,000 residents, grew substantially in the 1950s after the development of the Garden State Parkway. Prior to that, residents unsuccessfully fought for the development of a local trolley system to bustling shore towns such as Point Pleasant.