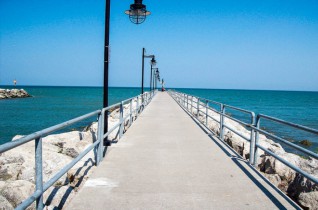 Back in 1878, many wealthy visitors from New York and Philadelphia vacationed at the Jersey Shore in such towns as Asbury Park, Long Branch & Ocean Grove.

At this time, present day Avon by the Sea was known locally as New Branch or the Swanton Tract, depending on whom you talked to.

One of the many wealthy visitors to frequent the shore was a tobacco manufacturer from Philadelphia named Edward Batchelor. One day while en route to a fishing hole, he happened upon New Branch and was very impressed with the land. Coincidentally, the land was for sale, so Mr. Batchelor purchased it the next day for $45,000.00.

In 1897 Mr. Batchelor hired a few engineers to look after the land. It is during this time that the town started to take shape. Mr. Batchelor had wanted to use the land as the new headquarters of his tobacco company, but instead took the advice of his engineers and developed the land for residential use.

With Mr. Batchelor's guidance and investments over the next several years, the town started to grow as a resort community. Land for residential purposes was sold for astronomical amounts.

The town was incorporated as "Avon by the Sea" on March 23, 1900. Soon after, a boardwalk was laid and a fire department was organized.

Nowadays, Avon by the Sea still offers much to vacationers or day visitors. Just 60 miles from New York and Philadelphia, it is a great place to swim & relax in the summer sun. Plenty of fine restaurants, shops, Victorian homes and a non-commercial boardwalk make Avon one of New Jersey's most relaxing respites.

The Avon Beach is open year-round. Lifeguards are on-site weekends beginning Memorial Day weekend and full-time on mid-June through Labor Day. Enjoy the boardwalk, fishing and surfing at certain locations.