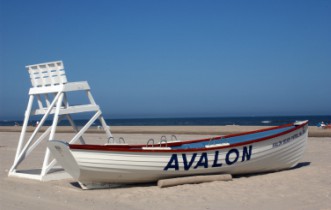 Formerly known as part of Seven Mile Beach, Avalon Borough was incorporated in 1892, expanded in 1910 and contracted in 1941 when portions were annexed by Stone Harbor.

Unlike Avalon's very real history, its name is a mythical one. Avalon was the moniker given to the place where the sword Excalibur was forged in Arthurian legend. The name was re-purposed in the late 1880s by Seven Mile Beach Company secretary Charles Bond, a former master at the Freemason's lodge in Spring Lake Heights.

Avalon started as a cattle ranch. For about a century, it was owned and operated by the Leaming family, which purchased the island in 1722.

After Seven Mile Beach Company took over in 1887, Avalon's transformation began. The remaining juniper forests were clear cut and the dunes were flatted to allow for the infiltration of the railroad and the explosion of lodging and leisure.

Like a page out of Pleasantville, things are just nicer in the beach town of Avalon. The town’s slogan, "Cooler by a Mile," refers to its position one mile farther into the Atlantic than other barrier islands in the state, but you may feel like you’re a hundred miles away from the busier beach towns.

Dune Drive is filled with one-of-a-kind stores and restaurants. Stop by The Princeton, with a swank restaurant and bar in front and a rocking local band scene in the back.

Rent a bicycle at Hollywood Bicycle Center and pedal the wide streets or rent a kayak at Moran’s Dockside.
The beautiful white-sand beaches are backed by stately dunes (note that it’s illegal to climb them). All but a few blocks of the island's shoreline are fronted by large, well-spaced homes that give the area the feel of an exclusive private enclave.
There’s a half-mile boardwalk for strolls and bike rides as well as public tennis courts, basketball courts, a skate park and large playgrounds.

Try the Avalon Chamber website for all sorts of family-friendly activities, places to eat, etc… www.avalonbeach.com